I do a great French accent. Specifically, I’m great at imitating the station announcements on the Metro. Who knows how to pronounce Barbes-Rouchechuart and sound like a native voiceover actress? Me. We all got a kick out of the announcements. Each stop is repeated twice, in a sing song-y voice. And it’s not the same recording played twice. It’s two different versions of the same stop. The first one goes up, the second goes down. Words can’t describe the nature of sound or the reason behind my obsession with the train announcements in Paris, but I loved going on the Metro exclusively for that reason. And that you don’t need to validate your ticket on the way out. But otherwise, the Metro is gross. On a scale of Subway to Tube, it’s pretty nastily close to the Subway. Saw one man urinating in plain sight, several rodents, and it smelled so bad. But hey! How about those train announcements! Anvers? Anvers!

We took the Metro 11 glorious announcement filled stops to the Louvre on Friday morning. This leads me to the third and final top moment of this trip. I only had about an hour and the Louvre is a big place. So I decided to visit Mona Lisa. People might tell you that the painting really isn’t a big deal and that it’s no better in person than it is watching the Da Vinci Code, but I came to Paris and I was going to meet Mona. On my way to the Mona Lisa, as I was walking up a staircase in her general direction, I noticed an exhibit under construction out of the corner of my eye. So I went back down the stairs to get a better look. Better than under construction, an entire room of sculptures was being restored! I must have spent at least half an hour watching the conservators in awe of their sacred task. I want to be them when I grow up. Except I don’t think I can deal with the science part of it. But to get up close and personal with some art! To touch sculptures, nay, FIX SCULPTURES with permission? No alarms? Preserve an enduring artistic legacy? Where can I sign up? Sigh. To be so close.

I pulled myself away from the view of the conservators at work and continued on my way to Mona. I knew I was going the right way because the route to the painting was WELL MAPPED. And soon enough I saw a room on my right with lots of people and a little painting built into a fortress of a wall. Mona Lisa! Mona Lisa! That lady with the mystic smile! She’s not much of a looker, but she sure knows how to carry herself! I took a couple of pictures, and then spent a while taking pictures of other people taking pictures of/with her. Not in a must-be-meta way, but because it’s so entertaining to observe people take a picture with a painting. I had a better and more compelling motivating factor at the time but now I can’t seem to remember it. Anyway, I found this experience to be exciting in the same way the Eiffel Tower was. You’ve heard about it, you’ve ready about it, you’ve seen so many pictures of it that there’s just no way it can be any different in person, but it was!

Are you warm, are you real, Mona Lisa? Or just a cold and lonely, lovely work of art?

Hard to say, but I certainly enjoyed myself.

Before we left for the museum, Dana and I went shopping for Shabbos food because we didn’t find the Chabad hospitality we expected. I invite you to prove me wrong, but according to Hanah’s roommate who kindly made phone calls for us because she’s French, Chabad doesn’t operate as we’re accustomed to. Instead of “you’re a Jew? You need a nice Friday night dinner? Look no further!” we were met with a “but Shabbos is in a few hours, you’re calling now?” I’m pretty sure we found a bunch of Chabad houses in Paris, but Elodie (Hanah’s roommate) indicated that instead of hosting one big meal, they find families to host you and charge you 10 Euro. Please prove me wrong, we were terribly disappointed. Fortunately, there was a kosher supermarket across the street, so we bought deli, bourekas, matbucha, hummus, challah, etc. to make our own meals.

We davened at Ohalei Yaacov, a sfardi shul about 10 minutes away from the apartment. The experience was really nice and brought back memories of several never-ending Bar Mitzvahs that I attended in the 7th grade. They say everything out loud. That works for a Friday night service, as it’s pretty short. But I knew that this wouldn’t be nearly as inspiring and moving on Shabbos day 3 hours in and still before Musaf. I like that no matter what Jewish community you visit in the world, some tunes are always the same.

After shul, we walked home and had dinner and stayed up and talked and waited to be dairy so we could binge on Cadbury chocolate. Down with portion control. That’s how those French ladies stay so skinny

I was going up these stairs…

Then I saw this…

So I went back down the stairs..

Why can’t this be me?

This should be my life!

Maybe one day it will be.

I got carried away.

And this is after I edited.

Creepy. In a good way.

Me and Mona Lisa. 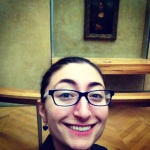 How bout that Mona Lisa Smile? 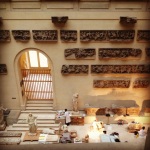 Ah to be the person with the keys.

Did not know that Jesus was a gymnast.

Such a creepy font.

Dana, chasing Jewish children down the street in hopes of getting invited for a Shabbos meal.