Haven’t felt like blogging much lately, so I apologize for the delay and lack of alacrity. Even now I’m not in the mood, but I know that you live to live vicariously through me and I’d hate to let you down. Life’s been good. Loving my new hat. I can walk even longer now that my head is warm. Please pray that I don’t lose this one.

Spent Shabbos at Fabienne and Ezra Elzas in Golders Green. Great fun, great company, great food, GREAT BUNNY! Fabienne and Ezra have a bunny named Jackie. I’ve never held a bunny before. After all this build up in my mind and in the studio, I expected to be underwhelmed. But let me tell you. I’m going to have a pet bunny one day. It was great. Jackie loved me. I was told that she doesn’t really like to be held, but the pictures I’m going to post eventually will prove to you that I’m special. I’m a bunny whisperer. It’s a gift. I WANT A BUNNY!

It was also Purim this past weekend. My least favorite of the Jewish holiday line up. I’m not into enforced joy and revelry and spiritedness so this is really not my thing. All things considered, I celebrated in the way most conducive to working within my Purim aversion. I heard megillah (story of how the Jews were almost wiped out in Persia long long ago) but did not hear every word (you’re supposed to) because I’m pretty convinced that the guy reading didn’t actually say all of them. It took him about 10 minutes to finish. Then I went back to Fabienne and Ezra’s and played with Jackie and got ready to go to a party at Rachel Shaw’s! Great, great fun! Super chill, all girls, great food and drinks, met so many lovely people and had great conversations and eventually took over as DJ. Stayed over at Ezra and Fabienne’s again and played with Jackie again.

Headed back home via Mr. Baker and stocked up on bagels and boreakas then hear megillah (you’re supposed to hear it twice) at St. John’s Wood Synagogue. Didn’t hear every word this time due to the large presence of children in the audience and the girl (not child, teenager) blowing a whistle every time Haman’s name was read (you’re supposed to make noise when his name is called because he’s the enemy so BOOOOO! NOOOISE!!) which caused ringing in my ears. So thanks. Better luck next year. Had a few hours before it was time for the Purim seudah (you’re supposed to eat a celebratory meal with friends and/or family) at Rachel Kaye’s house so I booked a flight to Israel for Pesach! Huzzah!

Had a great, great time at Ray Kaye’s–met some really cool people, some of whom took interest in the fact that I’m an artist and made some recommendations of artists to look into and others who invited me to their birthday party. Yay for being social. After a Purim that felt spent mostly in transit, I made it home and spent a little while looking for a piece of text to share with my tutorial group. Basically, all the students meet with their personal tutor in groups for a group tutorial. Mel asked that we bring a text that we’re inspired by/enjoy/wrote to share with the group, so I brought a two excerpts from Mapping the Imagination by Peter Turchi. I didn’t wind up going to bed until late but I can’t remember why. Ah yes I was trying to book my train and lodging for my trip to Cornwall next month. Didn’t happen until this (Monday) afternoon.

The group tutorial was good, but extremely long. 10 AM to 5:15 PM. Very thorough to say the least. 12 people approx 30 minutes each plus a lunch break. I spoke about my obsessive walking, my paper cutting, my stained glass and how I’m trying to figure out how to make it personal, how to give direction to my walks, how to bring into the studio. I love my walks, but I would also love to be looking for something specific. Like where the River Thames flows under the pavement, the underground passageways within UCL, other things worth charting, etc. One girl in group, who also has a penchant for walking, has been photographing all the beauty salons and bakeries in South London with religious references in their name. There happen to be quite a few. So I hope I find my [insert obscure thing worth my attention here]. After the group tutorial, I spent some time organizing my travel plans (more on that later) and rotting away on Facebook until my computer died so I went home and started my HiattChat shift. Busy night!

I think I’m going to bed now. I hope you enjoyed every last minute detail of this post. You’ll get some pictures eventually.

PS: LAST NIGHT I BOOKED A TICKET TO SEE A RABBIT HOPPING CONTEST IN LONDON ON MAY 12 I KNOW YOU’RE JEALOUS MY LIFE IS AWESOME.

This is me and Jackie. 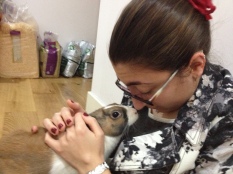 We cuddle so nicely. 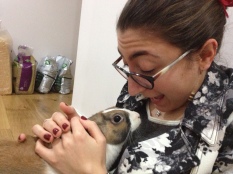 Look how forced that is.

Look at Jackie, leaping towards me and away from Dana.

Forgive me for this bunny indulgence.

Last one I promise. 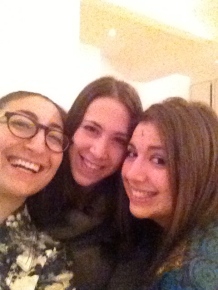 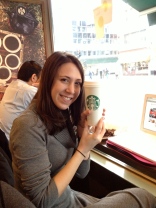 Dana and her huge coffee. 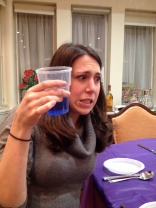 Dana and her blue water. 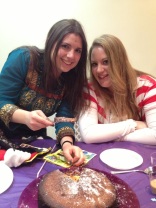 Had such fun at Rachel’s seudah! 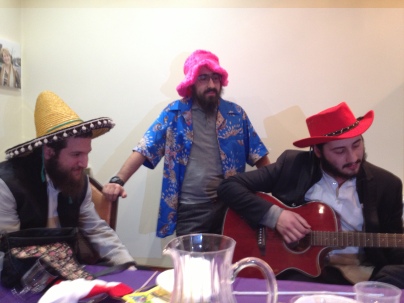