I left you in suspense about my boots. I spent many hours today chipping away lots and lots of plaster to reveal a deformed plaster boot. I saw that coming. The mold was in decent condition but I don’t want to see plaster for a while so I’m just going to put that away for now and wash my apron.

The plaster damage control plus the Tuesday Seminar didn’t leave me with much time to do much else. I usually complain about those seminars but I thought that everyone who presented today did a great job with their work and the conversations that ensued were, for the most part, compelling. But we had two of the presentations outside and there happened to bungee jumping in the quad today so that was a little bit distracting.

Today was a beautiful day. I felt out of place in my winter clothes but I’m sure it’ll snow next week or something. Spent minimal time outdoors before I went over to City and Guilds. It was the first time I arrived there without something to do. I was supposed to finish polishing my glass map but we ran out of black grate polish, so I’ll have to wait until next week. I really wasn’t sure what to make. So I decided to copy something I’ve seen lying around in the studio and have always quite liked. I started copying it,but then it ended up evolving into something of my own. I love the stained glass panels, but as a sculptor, I’m drawn to making 3D objects that can stand on their own. So I started making a glass house. It’s been a while since I explore the home motif so it seemed appropriate. Also, it’s so much easier to cut big pieces of glass than the tiny bits I used for my map. I cut all the pieces out today in the last hour and I can start copper foiling on Thursday! There’s a foundation student who sometimes works in the evening and she asked me what I make when I’m at the Slade. So I told her I don’t really make anything, I just walk. And that I’m trying to find a way to make this walking inspire my work but without too much success so far. She asked if I’d ever done etching. She explained the process, start to finish. With all my talk about etching these past couple of weeks, I think it’s time I buy a copper plate. Tomorrow? Maybe!

I did some sketching on the Tube tonight. On the first train ride (Northern to Charing Cross), the woman I was sketching got up before I was done. This other lady across from me asked if I had gotten far. I showed her my shoddy drawing and she smiled and said it must be annoying when people get up before I finish. She also suggested I try life drawing, as the models sit still. Thanks for the suggestion.

On the second train (Bakerloo to Edgware Road) a huge group of Spanish speaking young annoying people got on. I started sketching a girl standing not to far from me. The kid next to me noticed I was drawing and within seconds he communicated that to everyone around me and it was awkward because I could feel them all staring at me, but when I’d look up they tried to be all inconspicuous but the thing is, I know enough Spanish and enough body language to figure it out. So I switched cars mostly because they were loud and annoying.

Made an avocado, mango, corn and scallion salad for supper. I had it on Shabbos, it was great. My salad was not. Meh.

Finalized my lodgings for Cornwall at last and putting the finishing touches on my plans to go to the Lake District next week.

Up next: Lunch date with the one and only Rachel Shaw and a walk around the city. Perhaps to buy a copper plate? Maybe I’ll bring the Holga along for the ride? It’s been a while since I shot film. 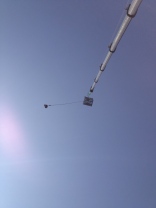 Bungee jumping! In the main quad!

I liked this installation. A sound chamber.

Lovely day to be outdoors. 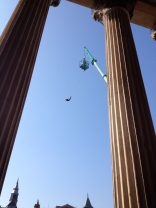 I want to do that so badly. Preferably out of a plane. But this could be a good start. 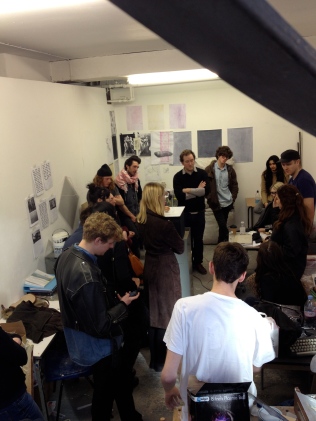 Seminar Tuesday! Also liked this piece. If you don’t speak Turkish you won’t get it. If you do, it’s quite clever. There were two more seminars, one installation and one performance, both were great but I forgot to take pictures. Alas.

I went at it with a hammer and a pair of scissors for 3+ hours. Never again.

At least the mold was semi-salvageable.

The next glass project. Almost all the pieces have been cut. Stay tuned.